Religion doesn’t cause Violence. It’s the other way round.

July 29, 2016
This is SO counter-intuitive. It’s really hard to get your head around. It seems plain common-sense that much of the violence we see in our world is caused by religion. And here I am trying to tell you that it’s the other way round? That violence causes religion? It’s like saying UP is DOWN.

Exactly. Up IS down. That is a reality that was kindly explained to me by that nice Indian optometrist at Specsavers.

“You know that our eyes actually see the world upside-down,” he explained in his emollient tones.

“Eh?” I replied. I could feel a stupid look on my face. In a moment I would look like a heavy-browed Neanderthal and be saying “Wha(t)” without pronouncing the ‘t’.

“Yes,” Mr Specsavers continued amicably as if addressing a small child. “The lens in the eye inverts what it sees, and projects it upside-down onto your retina.”

This sounded vaguely obscene, so I just said, “Oh.”

“So your eyes see the world upside-down. But fortunately our brains are smart enough to turn it right side up for us,” he concluded.

“Wha(t)!” I replied from some prehistoric brain freeze. “My brain turns the world right side up? Even though I am actually seeing it upside-down?”

“Exactly.” And I experienced a minor inversion of reality.

Religion doesn’t cause Violence. It’s the other way round. Violence causes religion.

And, in fact, religion, and the many aspects of culture that have their birth in religious practice are the responses of human societies to put a lid on violence.

If you’re ready to turn a bit of your reality upside-down, let me start at the beginning.

Once upon a time, about 250 thousand years ago, when hobbits, Neanderthals and Homo Erectus roamed the earth – two hundred thousand years before the First Australians invaded the Land Down Under to establish a thousand aboriginal nations – a caveman watched as a neighbour wandered by, arm-in-arm with a rather fetching cavewoman.

Our caveman (let’s call him ‘Uurgh’) had seen this cavewoman before but today there was definitely something different about her. She was on the arm of his neighbour. His neighbour was looking at her in a particular way. Uurgh may not have had a word for lust, but he knew it when he saw it in his neighbour’s eyes. And he had an epiphany.

He really desired this woman. Uurgh picked up a club he had been using earlier in the day to batter a Woolly Mammoth into mince meat. He delivered a blow to his neighbour’s cranium and took possession of the cavewoman.

Uurgh’s neighbour was not best pleased to see his lady friend dragged off so, once the stars disappeared from his eyes, he went looking for his own Woolly Mammoth Mince Meating Club and went after Uurgh.

A blow for a blow followed. And then it got worse.

The rather fetching cavewoman had brothers. They were likewise not best pleased about the treatment being meted out by the two Woolly Mammoth Mince Meaters. Punches were thrown. And returned.

The WMMMU (the Union of Woolly Mammoth Mince Meaters) saw their comrades under attack and came to their aid. An all-in brawl exploded.

Just at the worst possible moment, a wizened old man came out of his cave to see what all the noise was about. His name was Leggone because one of his legs was gone, taken by a Woolly Mammoth’s tusk during the Great Mince Meating Hunt of twelve winters earlier.

There was a momentary halt in the battle. Heads turned to Leggone. Eyes saw the old cripple standing (right way up) at the mouth of his cave.

Someone, later no-one could remember who, yelled, “Shut up you old cripple” and whacked Leggone on the head. As he toppled to the ground, a second combatant shouted “YEAH!” and hit him again. Others joined in and Leggone was soon dead. And all was quiet.

That was what was amazing. All the fighters looked at each other. It seemed as if there was no more reason to fight. Their desire to come to blows seemed drained away. They walked away. Not in silence but amazed and questioning. Something mysterious had happened. The killing of Leggone had stopped the violence. How could that be?

Over the next weeks and months, the community came to understand that there was something special about Leggone. Even something beyond nature. Supernatural. It was Leggone who had stopped the violence. His sacrifice had produced calm and even cohesion within the community.

Someone put a pile of rocks at the mouth of Leggone’s cave. Gradually others gathered more rocks and built the pile into a tower.

One branch of modern anthropology suggests this is how religion began. In acts of scapegoating violence that converted the violence of all against all, into all against one. The apparently supernatural power of peace that followed the scapegoat’s death turned that victim into a god. Subsequent ritual repetitions of the original murder, eventually so sanitised as to be almost unrecognisable from the original event, served to safely release communal tensions, and maintain a cap on violence.

And thus, football was invented.

June 28, 2016
I'm a Presbyterian. Pray for me.      In 2013, the Presy General Assembly of Australia affirmed the biblical definition of marriage as a “lifelong  union of one man with one woman, voluntarily entered into, excluding all others…”      The proposition is not unreasonable. Marriage, according to the Bible, is one man and one woman. It's possible to debate if this is what the Bible says, of course. It's not hard to point out that lots of polygamists are splattered about the early part of the Christian Bible, but, well, nobody was perfect then.      Anyhow, let's now cavil. This is, as I say, a very reasonable position. The Church is certainly entitled to say it. And to believe it. Indeed, I rather like it myself, probably because Judy and I entered into such a relationship almost 48 years ago. And we're still in it. So, if the Church wants to say it's the proper definition, that's perfectly fine. For the Church.      This week, my Church
Read more 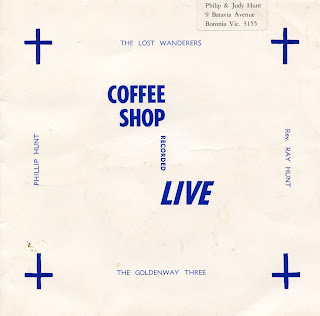 It is a matter of record that my career as a recording artist spanned more than a decade. Four songs. Three records. Total royalties: less than $1. No reason to be jealous. It began accidentally in about the late 1960s. Here's the cover of the EP.   And here's the back cover. " Nobody Knows " was later used to lull rowdy teenagers to sleep at Gold Coast Secondary School Camps run by the Methodist Church. Doubtless, my soporific performance enhanced sleepiness. Also on this EP is a recording of my big sister's group, The Goldenway Three. Judith, the aforementioned Big Sis, is the lead and two other sisters (not mine), Janet and Heather Bishop, do the harmonies. I can be heard playing the piano on " Go Tell It On The Mountain ". Following this brilliant start was my venture into country music with a song about a horse. Not any horse. Gunsynd , the Goondiwindi Grey.  When Gunsynd ran his last race, a couple of established arti
Read more

Lyle Shelton, spokesblogger for the Australian Christian Lobby wrote: "New totalitarian rainbow law in Canada has decreed that parents who disagree with their child changing gender are guilty of “abuse” and could face having the state remove their child by force." So what's wrong here? This might be the truth as ACL sees it. Trouble is, it is simply not accurate. And not fair reporting. The "new law" for which Lyle generously provides a link , makes no such decree. I've read it all the way through. Please point out what I missed. Lyle goes on: "Parents who are concerned that transitioning is not in their child's best interests are automatically classified as “abusive”, according to Ontario’s Minister of Children and Youth Services Michael Coteau." Really? Automatically? Couldn't find that in the Act. Lyle suggests that this is what the Ontario Minister of Children and Youth Services says. I'd better check that out. Oh.
Read more